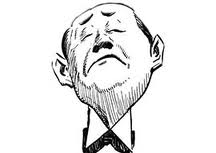 If you've checked out my want lists, you now that in addtion to the sets, Yankee team sets, and subsets that I collect, I also have player collections.  I'm working on a Guidry, Nettles, O'Neill, and Tino Martinez player collection.

Like most collectors, I have searches on Ebay that send me alerts every day. (Which sucks when I'm at work for 38 hours straight, nothing like coming home to 300+ e-mails).  Well this listing came up a while ago, I didn't bid on it, but I added it to my watch list to see where it would end.


Is that insane or what?  I can't decide if this is a collector who is putting together a PSA 10 mini set, or a Nettles Super Collector.  I mean, it's a nice card but $610, crazy.
Posted by The Baseball Card Snob at 12:34 PM 2 comments:

What Topps has made me do! Part 1

I think many of us have been lamenting Topps monopoly of the licensed trading card industry.  So I pose a question, how has it affected your collecting?

It's affected mine, by having me go backwards.  I know a fair amount of collectors love vintage.  For me, I like it, reason being, I'm too picky on condition.  So as much as I like vintage, I don't go out of my way to collect much of it.  I'm still working on several Yankee team sets in the 60's and now I've decided to go after these. 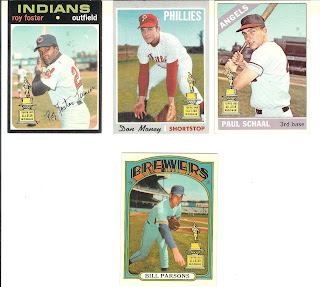 Yes, the (apparently) highly sought after Topps Rookie Cup cards.  I plan on going all the way back to the initial issue in 1960.  The cards look at little different in that first year. 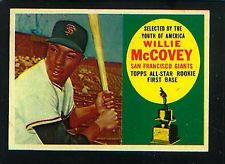 As you see, as large portion of the card is devoted to the trophy and other information.  One thing I noticed when I started to checklist this set, is that for as many players that became stars, there are at least two others who were total busts. BTW, this McCovey card has a day to go on ebay and is priced at $132.50, yikes.

Here is another one that will set me back a few cents. 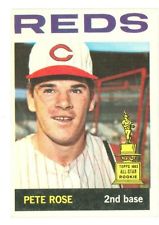 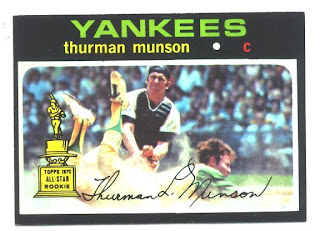 This one is going to be brutal.  We all know how chippy the 71's can be, and I need two, one for the cup set and one for my Yankee set.

I don't know why I never collected these as they were released.  Probably because I also put together the League Leader, Highlight, All-Star and Post Season subsets, and decided one more set was too much.

Email ThisBlogThis!Share to TwitterShare to FacebookShare to Pinterest
Labels: collecting

On of my previous posts mentioned the shopping malls in Paramus NJ.

CaptKirk42 mentioned that there is a mall near him that was once and open air mall and is now enclosed.

The Garden State Plaza was like that as well.  When my parents first moved to NJ in 1974, The Plaza, as it is affectionately known looked like this. 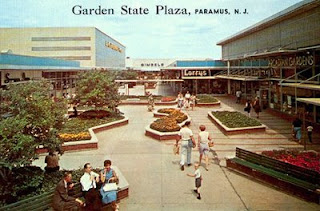 I'm not sure if it was this section, but there was a baseball card store that had space in this mall.  They originally started out in another mall (Bergen Mall) but out grew their space and relocated here.  I remember standing in line at this mall to get an autograph from Roy White.  That store still exists, it is now known as Buddy's Sport's Corner. It has moved several times and is now located in his 3rd Paramus Mall, Paramus Park. 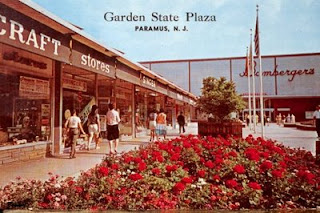 You can tell these are pretty old, Bambergers changed their name to Macy's in 1986.  The company was actually owned by Macy's.  My impression is that Bambergers was a more suburban store.  Macy's was a  little more upscale and urbancentric.

Even to this day I remember this, 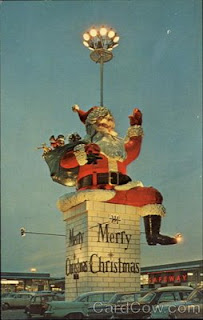 When Santa went up, you knew Christmas was close by. 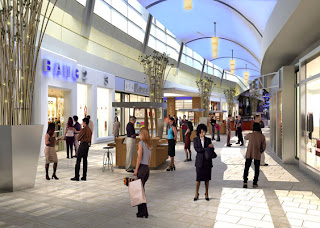 All enclosed and very upscale. 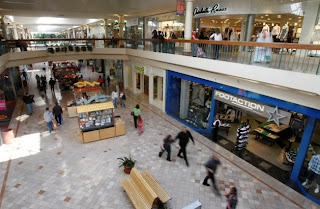 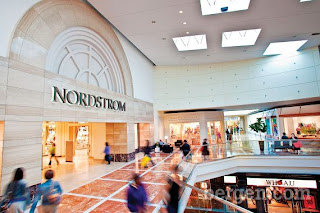 Now the interesting thing is that I hardly ever go to this mall.  It is now probably double or triple the size of the original open air mall.  For me, that's too big.  I can hardly remember where anything is and the parking is  a nightmare.  I stick to Paramus Park, it's smaller and has a more welcoming feel to it.

So, if you're ever in Bergen County, stop in one of these malls and look around.  If you let me know ahead of time, I might meet you there.
Posted by The Baseball Card Snob at 12:38 PM 1 comment:

I just completed another trade with Chris and here is my take.

Now this is something you don't see everyday.  A bumper sticker, and a quite nice one at that.  Unfortunately, it will not fit on my motorcycle.  But I will try and find a place for it.

You see the url for Nacho's blog.  I don't know why, but I always think it says "fan of freds". Who exactly is this Fred guy and why is Nacho a fan of his?  Fred Flintstone, Fred Willard, that dorky kid Fred 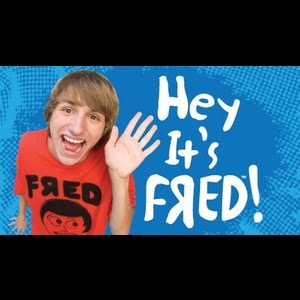 from those lame Youtube videos?  I hope its not the last guy, I'd lose all respect for Chris.

In addition to the bumper sticker there were cards, a nice bunch of them.  Here are the highlights. 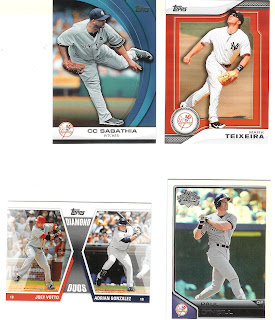 The blue CC is from 2011 Topps Wal-Mart hanger packs.  The red Teixeira is from the Target version, I really like both of them and I'm trying to obtain the rest of the Yankees.  The O'Neill is the shiny version to add to my O'Neill collection. The Diamond Duos is the last I need for that particular insert set.

Thanks Chris. If you haven't checked out his site, go take a look.  It will be worth your while.
Posted by The Baseball Card Snob at 12:07 PM No comments:

Something I picked up at Sports Authority

Sports Authority sent me an e-mail with a 25% off coupon download for my birthday. Mighty nice of them.

So I went to one of the two stores that are close by.  If you don't know Paramus NJ, it has some of the bigger malls in NJ. The Garden State Plaza (I refuse to use the "Westfield" prefix), Paramus Park, Bergen Town Center, and The Fascist Center.  Whoops, meant The Fashion Center.

The other thing Paramus has is duplicate stores.  Just like you might have 2 Derek Jeter cards laying around.  Paramus has duplicate stores, two Modell's, two Sports Authority, two Toys r Us, two Best Buys, two Old Navy.  I'm sure  there are others, just can't think of any at the moment.  One of the reasons for this is that there are two major highways that intersect in Paramus.  Route 17 runs North/South, and Route 4 runs East/West.  The thinking behind the two stores, (all the ones I list have both a Route 17 and Route 4 store), is that most people travel only one of these two roads through Paramus.  If you don't have a "presence" on each road, you are most likely missing out on sales.  This doesn't hold true for me.  I live in the adjacent town and I can travel either road, depends on what store is closer to  home.

I used my 25% off to buy a blaster of 2012 Topps series 2.  I have only purchased blasters and a few looseys for this series, no hobby at all.  As I am only putting together one set, I'm trying to not buy so much.

But, something else caught my eye.  Just like it did at Toys r Us earlier this year.  Have a look 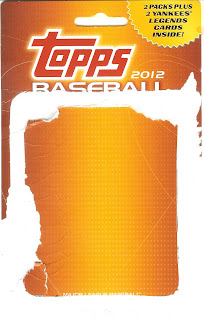 Once again, the bright yellow starburst in the upper left hand corner caught my eye.  Being the inquisitive type, I had to try a pack.  It didn't hurt that the cashier also took 25% off this pack.  The coupon was only supposed to be good for one purchase and I used it on the blaster first.

So lets see what these Yankee Legends look like... 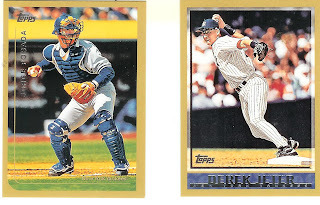 What the?  A 1998 Jeter and a 1999 Posada.  Posada isn't exactly a legend, and we've seen these card before, or have we?  The cards appear a brighter than their originals. And the backs 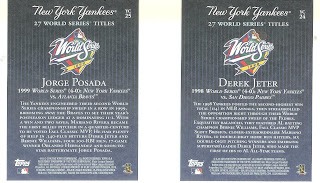 Lastly, look at the packs.

The packs are taped together, the Jeter and Posada were in between the packs.  Never seen that before.

Well, that's all I have for now.

Wow, two posts within a week.  I better go lay down.

Posted by The Baseball Card Snob at 8:19 PM 7 comments:

Happy Birthday to Me and other thoughts

Look at this, another post in less than a week.  Stop the presses or the keystrokes or whatever.  Turned 48 today, I think that puts me in the "older" demographic when it comes to collecting.  Like my wife said this morning, it's only a number.  Yea, but a pretty big honkin number.  Anyway for my birthday, I got to help her mulch the flower beds. Whoopie!

I apologize in advance if this becomes stream of consciousness writing, I'm just having some difficulty putting some thoughts together.

I've been kind of indifferent lately when it comes to collecting.  For me, there is nothing current out there to collect right now.  I purchased as much series 1 and series 2 2012 Topps flagship as I intend to purchase.  Nothing else is peaking my interest.  Some of it is just out of my league price wise, and some of it has freakin short prints in it.  It's bad enough the flagship has sp's, I don't need or want to try to put together any more sets that have short prints.

So while I was being indifferent, I realized that I really like the way the new Topps Rookie Cup looks on the more recent issues.  In the past I had considered putting this subset together, but there were always several other sets to work on and this kind of fell by the wayside.  It should be noted that I have been putting together other subsets, League Leaders, World Series, Highlights, since I started collecting. (Shame on Topps, this year's Highlight cards just have a sentence on the front of the card stating what the Highlight was, and a checklist on the back.  I want a full write up, like years past).

I needed a checklist to start this project, but couldn't find one.  I'm sure there is one out there, if there isn't, I will post one ASAP.  I started my quest on the Wikipedia page, it needs some work, but I didn't realize that Topps had omitted the cups from 1979-1986.  There are also problems with the Roster list, some of the players listed, don't have the cup on their card, even though they should. Additionally, the list doesn't provide the card number, I hope to help with that.

The interesting thing about this set is looking back at previous winners.  I had to scratch my head at some of these players, I'd never even heard of a few of them.  Which is good because they won't cost more than a common.  The problem is with the NAME players. At least these cards aren't rookie cards, but some second year cards are pretty steep in price.   The 1971 Thurman Munson card books at $120, finding one in NrMt shape will probably be next to impossible, as well as expensive.  There are also second year cards of Willie McCovey, Johnny Bench, Joe Morgan, and I think Tom Seaver.

I actually had a good time looking for these while I was at the ECN.  I'm planning on expanding my searches to shows slightly out of my immediate area.  I keep seeing the same people with the same cards.  Need to expand the search radius.

If you have any of these, please check my wantlists, I've got plenty of stuff to trade.
Posted by The Baseball Card Snob at 6:15 PM 2 comments: